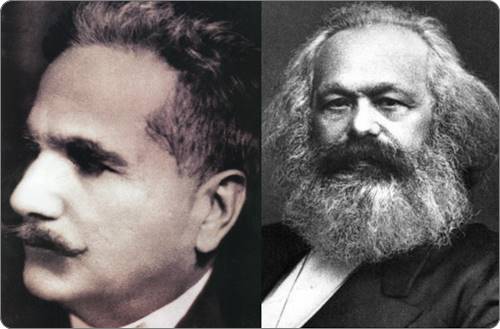 In the daily Zamindar of 23rd June 1923 an article of Shamsududin Hasan was published. The writer profusely quoted verses from Iqbal to establish that Allama Iqbal was a socialist. Thereupon the Allama addressed a letter to the Editor Zamindar which was pub¬lished in the issue of the paper dated 24th June 1923.

“I have just heard from a friend that some gentleman in an article published in your paper or some other paper (I have not yet seen the paper) have attributed Bolshevist thoughts to me. Since in my view, Bolshevist thoughts stand for the denial of IsUm, it has become necessary that I should repudiate in strong terms the thoughts attributed to me. I am a Muslim. It is my faith, and it is based on logic and reason that the best remedy for economic maladies has been proposed by the Quran. There is no doubt that when the power of capitalism exceeds the middle course, it becomes a curse for mankind. But in order to save the world from the excesses of capital-ism, the remedy is not to prohibit private property as the Bolshevists propose. According to the Holy Quran in order to keep private property within proper limits, the laws of inheritance and Zakat have been introduced. Keeping in view human nature, the Quranic way is the most practical way.

Russian Bolshevism is a strong reaction against unrestrained and selfish capitalism. But the fact is that both western capitalism, and Russian Bolshevism are the results of extremism. The middle course is the one provided for in the Quran and referred to above. The object of the Islamic Shariat is that on the strength of capital, one party should not be !n a position to exploit another. To achieve * this object, according to my faith the way indicated by the Holy Prophet of Islam is the easiest and the most practical. Islam does not exclude the power of capital from the economic system, but keeping in view human nature maintains it, and proposes for us an economic system by following which capital is properly regulated. I very much regret that the Muslims have not studied the economic aspect of Islam. Such a study would have revealed to them what a great blessing Islam could have been from the Islamic point of view.

My faith Is that all Muslims are brothers. In a community the individuals cannot be brothers in the true sense until they are on terms of equality with one another in all respects. Such equality cannot be brought about in any social system which does not envisage the proper regulation of capital, and its operation within certain limits. 1 am sure that the Russians themselves in due course will notice the deficien-cies in their system, and would then turn to Islam or to some system very much resembling the economic system of Islam. Under the present circumstances, however attractive the economic objective of the Russian socialist system might be, no Muslim can favour it.

The Muslims of India and other Muslim countries who after reading European text books on Political Economy are influenced by the western economic thought would be well advised to deeply study the economic thought embedded in the Holy Quran. I am confident that in the Holy Quran they would find the solution of all their problems. The Muslim members of the Labour Unions of Lahore should in particular pay attention to this matter. I am in full sympathy with their aims and objects, and I hope that they would not adopt an objective or a practical way of action which is repugnant to Islam.”