Nusrat Fateh Ali Khan – The Last Prophet of Qawwali – By A. Acharya

For many years before he became a towering figure in world music, Nusrat Fateh Ali Khan, the great Pakistani qawwal, was sold on cheap tapes at Sufi shrines in the subcontinent.

A phrase from a Nusrat qawwali that I use to describe my feelings for the late genius. 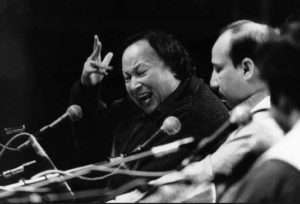 For many years before he became a towering figure in world music, Nusrat Fateh Ali Khan, the great Pakistani qawwal, was sold on cheap tapes at Sufi shrines in the subcontinent. Little did I suspect that in those gaudy stall-like establishments at the numerous dargahs that dot the Indian countryside lay a musician and singer of such power…such amazing virtuosity. In them, however, you will not find the voluminous, rotund mass of musical genius that Nusrat was in his final years. You will find a much thinner, and younger man than the one we have known. But the music, on early albums like Nabi ke Gulshan and Furkat ke Sadme is just as powerful as the potion that Peter Gabriel brought to us.

In fact, it was only when Peter Gabriel rocketed him to fame on the Real World music label that I re-discovered the beauty of qawwali. Till then, that particular form of mystic music was one among the distant sounds of my childhood years, spent in Hyderabad, India. A sound that was integral to my world then, as it was not hard to come by qawwali being played or performed in Hyderabad, but a sound that I was only later to realise the power of.

It was in Hyderabad again that qawwali re-entered my life. A cousin lent me a tape – Shahenshah, produced by Peter Gabriel. I was transfixed; and transformed. I copied the tape, distributed it to my friends and have proceeded to procure every Nusrat tape or CD available in India or the Internet. The spirit of prayer and devotion has never been more accessible, and enjoyable, for me.

Nusrat Fateh Ali Khan, I believe, has a voice that arrests the listener. The throaty rasp, the boom, the fluidity, all seem contradictory qualities in the same voice, but it is precisely these that bring about the effect of Nusrat’s song – drawing the listener closer to the divine haal. I have always rooted for rawness, be it in the blues of America, Bob Dylan’s music, or in the various folk forms that abound in our land. Something about a “from-the-depths-of-the-being” sound like Nusrat’s has more appeal for me that the sanitised, synthesised song of popular culture. I instantly take to the music, the message, and the mileu.

With Nusrat, the effect was as instantaneous and impactful – Khan Saheb achieves the state known as haal with as much aesthetic variation, classical mooring, and experimental bravery known to the Sufi devotional.

Later, in my search for more and more authentic qawwali, I discovered the almost forgotten but awesome sound of the Sabri Brothers and the Warsi Brothers. I replaced rock concerts with my peers with qawwali evenings on Jummeraat at the local dargah. I found Nusrat’s artform closer and surprisingly more contemporary to my emotional and physical reality than anything in my collection so far. I even began to dance to it at parties. Those days, I was looked at askance. Today, DJs in London spin Nusrat remixes at clubs.

This transformation from folk-spiritual idiom to post modern world winner was wrought with no compromise whatsoever of qawwali’s essentials. The depth of feeling, the simplicity of lyric, the rawness of emotion, the barest of instruments, and the human voice – these were still the stuff that Nusrat’s magic was made of, even in its club incarnations.

The fact that it sang praise to an all-pervasive, all-encompassing Lord may have had something to do with it too. In music, few things produce the kind of fervour, appeal and passion that divine inspiration does. Of course, there are exceptions to the rule. Listen to Bob Dylan’s Saved and you’ll see how blastic one can also be about spiritual rebirth. But that aside, genres like gospel in the West and qawaalli in the east are possessed of a passion inspired by the same force – the divine. And the divine draws us regardless, to dance-floor or to dargah.

It is difficult to imagine a musician with as much talent as Nusrat for at least another hundred years. His voice bordered on the superhuman, his scat-like vocals had a power that seemed to come straight from the divine he sought through song. And his accompanying party seemed tirelessly able to keep up with that power. Nusrat Fateh Ali Khan is no more. He died in his mid-forties, in a London hospital which his wife claims did not really do its best to cure him of his thyroid condition.

I wonder if we have seen the last prophet of qawwali. I wonder if Allah has someone else in store for us. Yet.

Download the best Qawwali collection of Nusrat Fateh Ali Khan songs in MP3 format (with permission and compliments of TheSufi.com).

Aporup Acharya is the Editor and Executive Producer of an Indian lifestyle portal – www.oyeindia.com [now defunct].