Alexander the Great: In Kalam-e-Iqbal 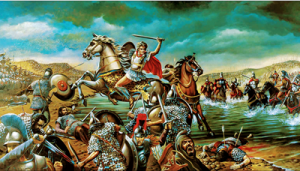 Alexander the Great was born in Macedon in Greece in 356 B.C. On the death of his father Philip he came to the throne of Macedon at a young age. Soon after he embarked on a career of conquest.

He marched to Egypt where he razed Thebes to the ground, and founded Alexandria. He next overpowered Syria and Babylon. He defeated Darius 111 the King of Persia, and burnt Persepolis the capital of Persia. Thereafter, he conquered a greater part of Central Asia.

Following the oriental custom, Alexander married a number of princesses from the conquered countries.

In 326 BC, Alexander and his hosts swept over what is now Pakistan. He wanted to advance to India but his exhausted soldiers insisted on returning home. On the return journey he died in Iraq at the young age of 33.

Alexander is known to history as Alexander the Great, and is counted among the great conquerors and Generals of the world.
In Zarb-i-Kalim  there is a poem entitled “A Sea Pirate and Alexander”.

“On account of your piracies on the sea, the people are exposed to great danger. For this you will have to be put in chains or put to sword”.

On this, the pirate said:

The point brought out is that any political order or governmental system based on brute power is sheer robbery, and such systems cannot endure for long.
According to Iqbal “Alexander stormed like lightning, and we all know that suddenly he died’. And again “Nadir Shah robbed Delhi of its treasures, but a single stroke of the sword put an end to him”.

In ‘Javid Nama’, in the poem ‘Chant of the Stars’, Iqbal compares Alexander and a Dervish and says:

“The poor man is fire, rulership and power are a straw,

The drumming of the Dervish, Alexander’s clamorous vanity,

The one is all peace and amity, the other is ail war and wrangling. Both were conquerors of the world, both sought immortality,

The one by the guidance of violence, the other guided by love. Bring the hammer-blow of the Dervish, break he ramparts of Alexander;

Renew the ancient wont of Moses, break the glamour of wizardly”