A Dark Era of Pakistan: By Abid Ali 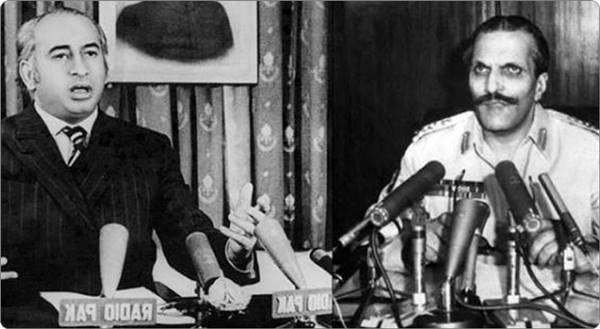 In July 5, early morning risers in Pakistan heard on the 6:00 a.m radio bulletin the armed forces had taken over the country’s administration and placed the top political leadership under temporary protective custody. There was no mention who carried this martial law and why? PNA (Pakistan national alliance) Supporters thronged the streets distributing sweets and shouting victory slogans. This shows that all politicians were happy on this act of Zia except ruling party (Pakistan people party). But the politician didn’t know that Zia was not like Yahiya Khan who conducted free and fair election and handover the powers to civilian govt. Zia was brought by someone else for specific objective and when that objective achieved, the same party who brought Zia into power remove Zia and paves the way for democratic environment and then all things became cleared that who brought Zia and what was the objective.

Of the numerous Pakistani rulers who changed Pakistan perhaps, forever but certainly for some decades was military dictator, General Muhammad Zia ul Haq. Zia ul haq after coming into power made a 14 minutes speech to the people of Pakistan and at the last sentence he called himself “The true soldier of Islam” and to kill the resistance of masses diplomatically this one Doze of Islamization was enough. Similarly our Judiciary also allows Mr Zia to rule the country by declaring the act as Doctrine of necessity. Now the only resistance to the Zia was Zulfiqar ali Bhutto who was imprisoned by him in a murder case. When Zia wants to know the opinion of people about his martial law rule by giving them a sweet toffee of Islamization in future, he released the Bhutto and allows him to meet with people. On the second day Bhutto marched with thousands of people in the streets of Lahore and shows his power to the Dictator that people are still with me and Bhutto declared that after coming into power again I will take strict measures against Zia. This was alarming news for zia and at that time he said that there was “Two men and one grave”. And then Zia ul haq with the help of our proud full judiciary executed a popular leader in a false case of killing of political opponent of Bhutto. The case related to murder of a political opponent was registered in 1975 when Bhutto was the prime minister and had been settled and Zia reopened the case.

Now this is the time for Zia to fulfill his promise and conduct free and fair elections. When strong opposition came from some of political leaders for conduction of free election so Zia ul Haq kept postponing elections, saying that it was not “written in the Quran” that election were to be held at a given date.

By crushing the opposition now Zia turns his attention toward Islamization of country and to prepare a special group of people for the so called afghan jihad. For Jihad he selects Wahabi sect. In October 1979 Zia moved further towards converting Pakistan into a totalitarian state, clamping a ban on political activities and gagging the press with imprisonments and flogging of journalist. Human rights activities were banned and environment was cleared for jihadist minds. Jihad was a religious term that’s why without the support of Religious leaders it was impossible to run the vehicle of Jihad without support of these religious leaders. The four seater vehicle of jihad running toward Afghanistan against Russia was driven by America along with Zia ul haq in front seat and back two seats were shared by Mullas and Tribal traditional men.

To please the People of Pakistan Zia ul haq introduced a lot of social and economic reforms. The economy during Bhutto period was not so good but the invasion of Russian troops into Afghanistan paved the way for Zia regime and after invasion huge assistance was given to Pakistan and dollars came to Pakistan like rain. After coming dollars to Pakistan the growth rate of Pakistan economy reached to the highest 6.2 %. Looking to the high growth of Pakistan economy, short cut loving people of Pakistan praised Zia for boosting Pakistan economy. Very little amount was served on Social sector but people and Zia’s media still was very happy. Same is the case with social reforms. Zia introduced number of social reform or in another context Islamized the existing reforms. The strict laws were imposed in country and opponents were openly treated with hard punishment like treated them with lashes in public places. A horrific situation created in country. Women were restricted to only their homes. Sports activities of women were banned and a team of women was stopped at airport when they were going to attend Olympic Games. Huddod ordinance was declared as law and women were badly treated under this law. A women activist Bushra Aitzaz arrested during a protest organized by the women’s action forum in Lahore in February 1983. Law of evidence was promulgated by Zia and when women action forum organized agitation against this law, so a revolutionary poet Habib jalib was attacked by a police man and injured seriously. Mostly educated people settled their life abroad. Paksitan now became the Sate of totalitarian and conservative people.for Introducing like these Islamist reforms people called him “Mard e Momin”.

Pakistan during islamisation phase under its own soldier of Islam was the largest supplier of heroin globally. Along with the trade of narcotics, came the trade in arms that gave rise to “Kalashnikov”culture still on display in the country. The military was involved for the first time in all legal and illegal activities. The old tribal pakhtoons system was replaced with rigid islamist. The musical instruments of pakhtoons were replaced with weapons and bomb. They considered themselves the sole protector of islam and with this mindset they attacked the Russian troops and won the war for America and save the so called Zia’s Islam.

After afghan jihad Pakistan faced a lot of problems. The biggest problem is of Sectarianism, which is dominant till now and nation is divided in sectarian groups. Before afghan jihad few cases of sectarian violence were reported in Pakistan which increased during and atfter islamization . unity in diversity changed into enmity in diversity . For jihad our education system was given in the hands of religious persons and new minds were created for upcoming jihads. In short zia changed the whole structure of society just in a decade and still we are not in a position to revive it.the seeds sowed by him have become big trees with deep routes is difficult to extract up.
But the hope from new generation is that they will never allow such types of people to administer the affairs of country without their chosen representatives and will spread brightness in society with the power of education.

At the last a poem of revolutionary poet Habib Jalib

Why should we fight America’s war
And color our land with blood?
We are awaiting light ourselves
Why should we throw stones on light?
O tyrant, have you ever thought
Why all of God’s creation is fed up with you?
We are the forerunners of peace and freedom
Why should we become the accomplices of a usurper?

Abid Ali is associated with the Department of Pakistan Studies at GPGC Mansehra.