Any of three species of dazzling birds of the pheasant family, Phasianidae, known as peacocks or peafowls (order Galliformes). Both the male and female are peafowl, however the male is a peacock and the female is a peahen. The blue, or Indian, peacock (Pavo cristatus), found in India and Sri Lanka, and the green, or Javanese, peacock (Pavo muticus), found from Myanmar (Burma) to Java, are the two most well-known peafowl species. After a quest that began in 1913 with the discovery of a single feather, the Congo peacock (Afropavo congensis) was discovered in 1936 in the forested interior of the Democratic Republic of the Congo, was discovered in 1936 after a search that began in 1913 with the finding of a single feather. 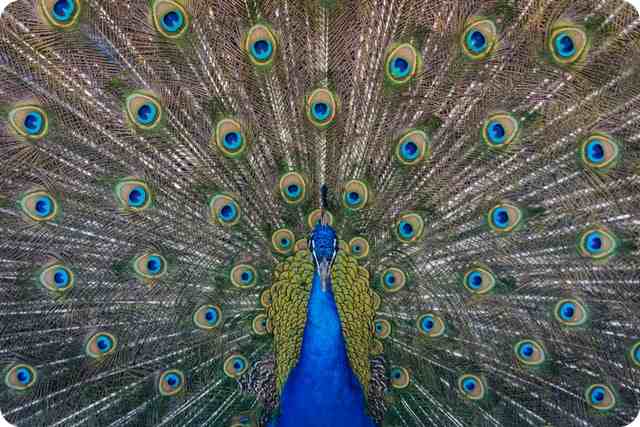 The male of blue and green peacocks has a 90–130 cm (35–50 inch) body and a 150 cm (60 inch) train of beautiful metallic green tail feathers. The upper tail coverts of the bird, which are tremendously extended, make up the majority of this train. Each feather has an iridescent eyespot surrounded by blue and bronze rings. During courtship displays, the cock raises his tail, which is beneath the train, raising it and propelling it forward. The tail feathers are vibrated at the end of the show, giving the train’s feathers a glittering appearance and a rustling sound.

The body feathers of the blue peacock are primarily metallic blue-green. The green peacock has green and bronze body feathers and a train similar to the blue peacock. Both species’ hens are green and brown in colour and approximately as large as the males, although they lack the train and head adornment. Both species live in open lowland woods in the wild, swarming during the day and roosting high in trees at night. The male forms a harem of two to five hens during the breeding season, each of which lays four to eight whitish eggs in a dip in the ground. The peahen incubates the eggs until they hatch, which takes around 28 days.When the chicks emerge from their eggs, they have all of their feathers and are able to fly around a week later. At three years of age, most blue and green peafowl reach sexual maturity. Some male blue peafowl have been found to breed as young as two years old.

The peacock is a popular ornamental bird in many zoos across the world, and it has a long history in the Old World. Because of their aggressive nature, green peacocks in captivity must be kept separate from other fowl. Blue peacocks can withstand northern winters despite being native to hot, humid climes. Green peacocks, on the other hand, are sensitive to cold.