Pakistan Writers Cub (aka: PWC) and members of its Ladies Chapter (aka: PWC-LC) is an organization of the Pakistani expatriate writers, poets and journalists.

Aik Shakhsiat Aik Shaam is one of numerous programs that PWC and PWC-LC plans to host on a regular basis. The aim of his very event is to hold an informal discourse with a notable Pakistani figure in the Kingdom of Saudi Arabia. The personality of the evening could be the Writers, Poets, Journalists, Entrepreneurs, Envoys and other successful men and women from the local Pakistani community.
This past weekend, PWC and PWC-LC hosted one such evening to honour a Poet and a humorist in his own right – Shaukat Jamal. Excellency Manzoor-ul-Haq, the former Ambassador of Pakistan to Saudi Arabia graced the occasion as the Chief Guest.

The program was also live streamed on YouTube and Facebook which was viewed by the Online audience from around the globe. PWC President Engr. Abdul Rauf Mughal chaired the evening and it was moderated by Yousaf Ali Yousaf – the General Secretary. The proceedings of the gathering got underway with the recitation of Holy Quran by Zubair Bhatti and beautiful Na’at rendition by Naveed ur Rehman.

The PWC President Abdul Rauf Mughal, in his welcome address, introduced the personality of the evening to the audience & viewers and read out his brief profile. Syed Shaukat Jamal, who came into limelight in the kingdom of Saudi Arabia by his active participation in different Mushaira programs and literary sittings. He is a well-known and senior most poets in Riyadh.

Jamal opened his eyes among the bigwigs of literatures. His father and his elder brother both were the inspiration for him. They served Urdu literature and journalism at length.

Born in Moonger (Bihar Province) on January 1, 1946. Most part of his childhood spent in Karachi, later he moved to Punjab because his father was associated with Information Ministry. He opted WAPDA Authority for livelihood in Lahore, then he also revolved around the different cities of Punjab as WAPDA employee. In 1969, he bid Farwell to WAPDA and temporary started working in private sector.
In 1972, he joined PIA and side by side, he completed his intermediate. He came to Saudi Arabia in 1975 and now, finally he plans to move back to Pakistan after spending a long-life span in Saudi Arabia.
Before coming to Saudi Arabia, his literary blood boiled up and he started writing in different newspapers and magazines. He had been the part of the English Magazine named as “Pakistan Cricketer” as a Features Editor. In 2008, he joined “Mizah Plus” which is an Urdu humour magazine publication from Karachi and stay as a member for long.

His poetry is the amalgamation of humour and irony. His first poetic compilation “Dewancha” published in 2000. Second beautiful collection of poetry “Shaukh Bayani” was published in 2003, which depicted the humorous as well as sarcastic elements. Third collection “Yeh Wasail Tabassum” published in 2008. In 2018, another Fourth marvellous collection of writing “Aik Lohar Ki” was published.
Jamal also wrote on the subject “Urdu ki Shugufta Shaeri aur Hamare Rasm-o-Rivaj” published by Karachi Fazli Sons. It is an anthology of amusing verses observing on our social and cultural norms.
The contents of his books were well appreciated in literary circles in Pakistan and Saudi Arabia.

Jamal also attended many international Mushaira programs in America, Bahrain, UAE, India along with Pakistan and Saudi Arabia, and won many hearts by his poetic wits and humorous satire.
Engr. Faiz Al-Najdi, Patron-in-Chief PWC, threw light on the core purpose of the program Aik Shakhsiat Aik Shaam. He mentioned that this event with Poet Shaukat Jamal would be the 7th such event which was first introduced during the first term of his Presidency of PWC during 2006 thru 2009. He also added that dozens of such programs with the distinguished personalities would be ultimately compiled in the form of a book. 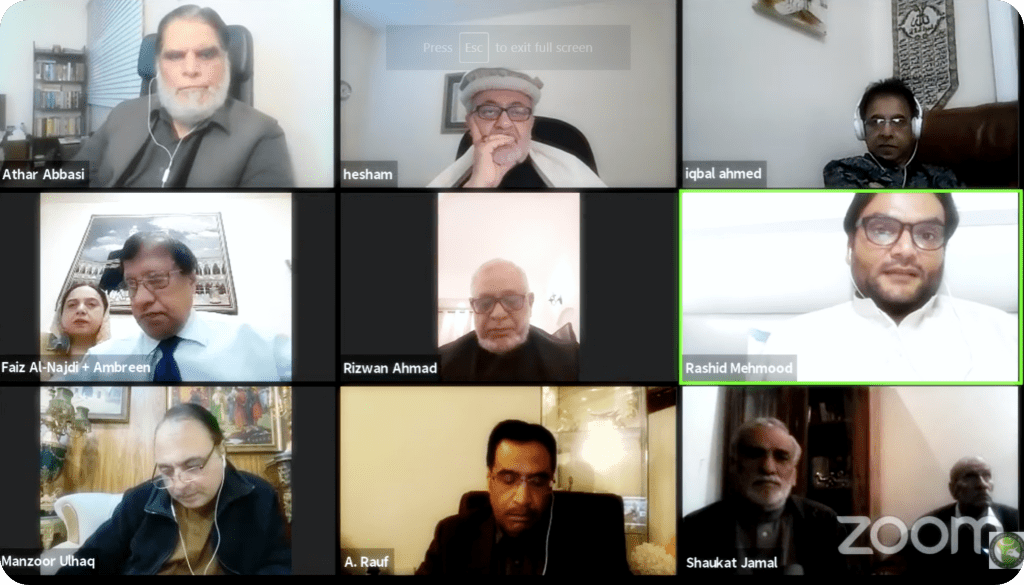 During these panellist sessions, some of Jamal close acquaintances consisting of relatives and friends were also invited to present their opinion on various aspects of his life & achievement.
Syed Ejazuddin (Cousin) in his speech highlighted the hidden aspects of his towering personality. He added that it was truly a matter of pride to become his close companion. He also drew attention to some of Jamal’s interesting traits, one of them was his extrovert nature and extending help to all & sundries.

Rashid Mehmood (Takhual Adbi Forum) mentioned that Jamal was very particular about his selection of words which was the hallmark of his poetry.

Shiraz Mahdi (Friend and Poet) from Khobar in his very eloquent speech remarked that Jamal’s poetic treasure was very rich and refined and that it was simple but very powerful. “There were only a few humour writers in KSA, and that Jamal was one of them. He also congratulated PWC and PWC-LC for hosting such evening in tribute of Jamal, “Mahdi added.

Engr. Hesham Syed a noted poet & writer also joined from Canada. He read out his poem especially written for the occasion to eulogize Jamal. He added that Jamal was the only poet who was vastly gifted. He was all praise for Jamal and his literary works & services.

In his keynote address as Chief Guest His Excellency Manzoor ul Haq expressed that poet Jamal was a writer & poet par excellence. He was a valuable asset of the community. “Writing humor and droll poetry was not an easy task but Jamal excelled in it, “Haq added.

Haq also applauded the efforts of PWC and PWC-LC for arranging such a beautiful evening and also mentioned that he always felt pleasure in being a part of PWC events.

Finally, it was now the turn of the Personality-of-the-Evening to speak. Shaukat Jamal enthralled the audience & viewers with some of his iconic pieces of poetry. He congratulated & thanked PWC and PWC-LC for bestowing him with such an honor by arranging a delightful evening. He also thanked each and every invited speaker who spoke kind words for him.

In his closing remarks, PWC President Abdul Rauf Mughal wrapped up the literary sitting and highlighted that the poetic work of Jamal was an indeed a delight to read. He thanked all invited guest speakers and Shaukat Jamal and Ambassador Haq for gracing the occasion with their august presence. He also thanked all members of PWC and its Ladies Chapter for working so hard to make this event a great success.

At the closing end, a memento farewell shield was awarded to Jamal in recognition of his literary services in the Kingdom of Saudi Arabia. The evening concluded on a happy note.