Massacre of a Language – By Adil Najam 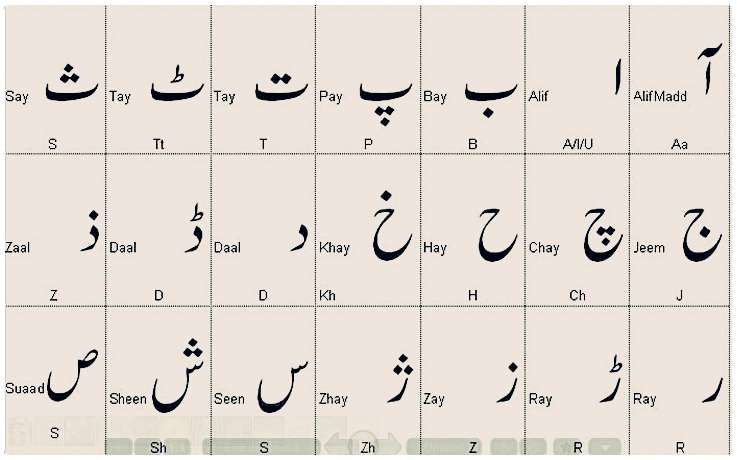 Although our son is only five months old, like all new parents we tend to be overeager about ‘planning’ his future. One element of this ambitious but doomed enterprise was procuring an Urdu qaida (alphabet book) to make sure that he starts his education in his native tongue.

Obviously, we knew that he was unlikely to start reading anytime soon. But when you live abroad your nationalistic sensibilities tend to heighten and, after all, it is never too young to start an education. After several failed, and clearly misguided, attempts to get him interested in the contents of the qaida I am happy to report that little Musa has finally been able to get his teeth into the material, and I mean that literally. At this point he finds the book to be better chewing material than it is reading material. While you can certainly disagree with his preferences in food, having now reviewed the book myself I can vouch that his assessment of the educational merit of this particular edition is quite on the mark.

This qaida, which is to be a child’s very first introduction to reading in our national language makes an outright mockery of the language that it is supposed to be teaching. Consider, for example, that the very first Urdu word that a child using this qaida will learn is “ice cream”! Yes, you read it right “alif madd aaa” is no longer associated with “aam” (mango) as it used to be; it now stands for “ice cream”. How is that for a gustatory downturn?

The designers of this particular qaida obviously consider Urdu to be a bankrupt language and, as if out of spite, highlight the implied limitations of the Urdu vocabulary throughout the book by choosing English words to represent Urdu letters. The letter “ray” is now represented by a rocket, “zay” by a zebra, “meem” by a motor car, and “yea” by a yacht yes, a yacht!

Arguably, one can concede that the motor car is now a more familiar sight in Pakistan than the “moor” (peacock) which used to be identified by the letter “meem”. However, one has to protest that despite Byram Avari a yacht is still not a symbol that the average three-year-old Pakistani child is likely to recognize. Moreover while zebras have never inhabited our lovely land the only places where rockets do fly in Pakistan are in SUPARCO’s dreams. What is more, “Ddal” is now associated with a doctor, rather than the “daakia” (postman) we all grew up with. Maybe the qaida intends for us to interpret this as a sign of our rising fortunesâ€¦ or, at least, aspirations.

The fact that the qaida uses pictures and words that the average Pakistani child is likely to be unfamiliar with is sad but that, in itself, is not the source of my indignation. Unfortunately, that has always been the case-who, after all, ever refers to ‘phal’ (i.e. fruit) as ‘samar’? What makes the blood boil is how this qaida treats a language that has always prided itself over its versatile vocabulary. The insult of using English terms to denote some of the most common sounds in the Urdu language is compounded by the fact that as many as eight letters of the Urdu alphabet are left hanging with no words at all being associated with them! Is this what the language of Mir, Ghalib and Faiz has been reduced to?

Before someone writes off this particular edition as an aberration, let me point out that although bought at Islamabad’s Juma Bazaar, the qaida under review is no side street production. It was published by none other than Ferozsons Limited, the erstwhile doyen of Pakistan’s publishing industry. Yet, it seems that the qaida was produced entirely on the whims of a not-so-talented illustrator who was somehow fascinated with drawings of exotic animals. The zebra is joined by a giraffe, a kangaroo, an Australian cockatoo and a bald-headed eagle–none of these is an animal endemic either to our landscape or our popular imagination. In another image, “kaaf, kitab” is represented by an open book showing the picture of a Dutch windmill. Even more worrisome is the choice of “waqt” (i.e. the concept of time) as the entry for the letter “wow”-the child reader is supposed to understand the intricacies of this concept by seeing next to it the illustration of a clock (which most children already know as “gharri”)!

The cardinal rule in the preparation of a qaida is pretty straightforward but there is not much room to bend this rule. The words and images used should not be foreign either to the language of the qaida or to the everyday environment of the children who are going to use it. “A is for apple” and “B is for boy” were always good entries because these were things that most children can associate with. “X is for xylophone” was never a good idea because most kids don’t know what a xylophone is. Similarly, “Z is for Zebra” is OK in an environment where most children have visited a zoo and seen one of these stripped beasts, but makes little sense in an environment where even the zebra crossings are now devoid of their stripes!

This qaida is worth writing about not just because it is such a pathetic specimen of its genre but because it is symptomatic of so much that is wrong with our educational system and even more of what has gone astray with the societal priorities of our ruling elites. 80 percent of the pittance we spend on education goes to so-called ‘higher’ education. We cheer as private universities–many of them of dubious character-mushroom, but don’t even whimper as primary education goes down the drain. We support a criminally double-faced system that institutionalizes social injustice by providing one system to the privileged few and another the marginalized many. Maybe this qaida is poetic justice after all-maybe it is time for our children to reap the bitter fruits of the seeds of neglect that we have been sowing for so long.