Among all poets, Faiz Ahmed Faiz had a mastery over linguistics second to none. He obtained his B.A. Honours degree in Arabic from Government College Lahore, followed by an M.A. in English. Faiz was also proficient in Persian and Punjabi. As far English is concerned, within the prelude of Shaam-e-Shehre-Yaaraan , Sher Muhammad Hameed, Faiz’s close friend and classmate at Government Colleage Lahore, narrates a humorous anecdote which is reproduced here. Professor Langhorn, a renowned Professor of English at Government College Lahore, gave Faiz 165 marks out of 150 in his English exam. Someone protested how is that possible.”Because I couldn’t give more!”, was his reply.After leaving Army, Faiz also worked at the editor of Pakistan Times, one of the largest English papers of Pakistan of its era.

With a command over 5 languages, it is no surprise that Faiz had a beautiful palette of assorted colours to paint his literary canvass, which he adorned mainly with Urdu poems followed by a few master strokes in Punjabi and Persian.

During an interview Shoaib Hashmi (husband of Salima Hashmi and Faiz’s Son in Law) mentioned that he requested Faiz Sahib to document some great verses in their mother language , which led to Faiz returning with most his most well known punjabi poem “Rabba Sachiya too Akhiyaa see, Jaa we Bandiya, Jug da Shah ai toon”.

Here is another lesser known Qat’aa in Punjabi by the master wordsmith. 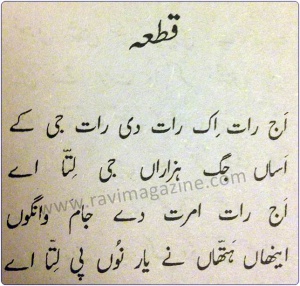