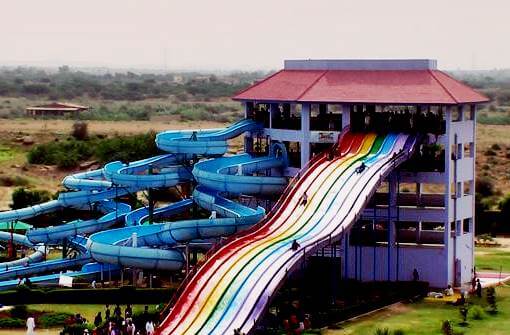 The financial situation of Aladin water and amusement park has a 50:50 debt equity ratio. Half of  the capital is provided by the equity holders while the other half is obtained through leases and loans. The total size of the balance sheet amounts to Rs. 372.161 million out of which 186.081 million rupees were generated through sale of equity and an equal amount is serviced through long term loans and lease financing. With respect to foreign and local investment component Rs. 309.081million is local while there is also Rs. 63.08 million worth of direct foreign investments. The detailed financial structure is given below :

The stock holding pattern of Aladin is very tight with all the stock being held by a single family. This stock pattern is uncondusive to the growth of the company as only a limited number of individuals are allowed to participate in raising of capital. The company is therefore a private limited company and its size is small compared to the companies listed on the stock exchanges.

The prime purpose of using debt was to finance the amusement rides as these were being used for the first time in such a large number and there were fears of a failure. These rides are also very expensive and as such in order to reduce the fixed costs and hence to reduce the break-even they were leased through local and foreign companies. This has resulted in a debt equity ratio of 50/50 which is scheduled to be brought down to 35/65 by the fifth year of operation.

There is no government support for the project because it is not a recognized industry and as such is deregulated. The government does not provide any assistance to this industry which is why the industry is not thriving.

The latest figures suggest that the company has a Gross Profit of 56.36% of total revenues as compared to 52.5% for last year. The Net Operating Income is 50.28% of total revenues compared to last year’s figure of 46.11%. The Net Profit today stands at 26.71% of revenues which was 23.14% the previous year. Earnings Per Share in Rupees equal 2.99 over last figures of 2.25. All these indicators point towards a robust growth of the park and hint at its success in the future as well.

Current Ratio is 1.43 which last year came out to be 1.3. The aim of the company management is to reduce the Debt Equity Ratio from the current 50:50 scenario to a less risky and more manageable 35:65. Debt Service Coverage Ratio is currently a healthy 2.55 times the interest due whereas last year it amounted to 1.88 times interest due. Capital Gearing is now 1 but last year it remained 1.07.

The Internal Rate of Return (IRR) is 23.2% and this rate is considered high. The Return On Investment (ROI) is 36.99% . The Pay back Period is calculated as 4.2 years. These figures are a proof that the park will have enough cash inflows to not only recover the initial investment but also to ensure profitability during the useful life of the project and will make the park feasible even under the harshest economic conditions.

ORGANIZATION OF THE FINANCE DEPARTMENT

The finance department is organized in 6 sub departments:

The prime functions of the sub-unit are

The sub-unit not only carries out the entire Banking Transactions and Complete Leasing Management but also takes care of all sorts of Insurance and the Company Income Tax.

This department has developed the entire MIS software that helps monitor policy implementations, procedures, and programs. The system provides quick access to confidential / internal reports and examines areas of business for improved value for money.

The personnel department is also a constituent of the finance division. The department’s major objectives are to recruit, manage, and develop workforce from the mostly contractual blue-collar workers. It is also charged with providing ample compensation to these important human resources.

Everyday after 1500 hours the “ Evening Family Group Package “ 50 allows the park to generate sales from otherwise unproductive time. The package is priced at Rs.80/ Person for the Water Park Only, Rs. 60/ Person for Amusement Park Only, and Rs. 140 for both parks.

The total number of memberships for the camp running 1st June 1997—31st July 1997 remained 31 children providing Rs. 31,000 to the administration as revenue.

The total amount generated from different forms of the In House Advertising of other products was Rs. 504,000 and it came down to Rs. 501,000 in 1998. The types of advertisement boards being used are Unipole Signs, Lamp Posts, Fence Boards, Information Signs, Inside the Gates, Fiest-Aid Booth, Changing Rooms, and Water Stations.

The event calendar was rather just a single event ‘ ALADIN QUAID FEST ‘ only in 1996. The second year had about 5 organized events spanning 13 days. Last year, Aladin organized as many as 12 events lasting 26 days.

There are no records available for Gate Money as these figures are not estimated by the Park Management.

The total revenues for 1997 exceeded Rs. 13 million however due to a slump in the economy stemming from the bomb and the subsequent FCA freeze resulted in lowering revenues to approximately Rs. 12.5 million. This is attributed to the fact that people after the freeze were in a depressed mood and did not have enough to pay for entertainment.

The total cash outlay includes all costs incurred by the company owners on this project which includes all the sunk costs. These are:

All figures in Milions

These expenditures are justified by the small payback period and have been recovered already through the operation of the park over three years. The shops in the AFC would be sold to interested parties who will then provide the products of their choice to the people. The projects under construction are scheduled to be completed by the end of the year and will open in coincidence with the millenium celebrations at the park. The sports club will have its own members as well as the AMI members as its customers. Its costs would therefore be met by the membership fees paid on an annual basis. The completed projects such as restaurants are already on lease and generate a lot of money through lease payments. The core facilities include the Amusement & Water Rides which were financed through leases and are tax deductible in whole.

This strategy is being followed by the Aladin Management through the use of various low priced packages such as, Evening Family Group 50, School Visit Package, Package for both parks in one ticket. The high end of the market is being penetrated via the Swimming Classes, Summer Camp, and Birthday at Aladin. These packages help Aladin attract all types of people and enter all consumer markets. This allows maximization of attendance at the parks and provides maximum revenues possible. The low end market is catered to by the packages priced as low as Rs.75 per person while high end is catered to by providing all the worthwhile facilities in one package. This strategy is highly successful and has played a major part in the growth of revenues since the park’s inception.

The parent company of Aladin is known as A.A Joyland Pvt. Ltd., which owns amusement parks in Lahore and Murree ( Patriata ). These parks cater to the amusement needs of the people in these cities. This allows the company to expand its services to different geographic locations and follow a market development strategy. The other parks are however, relatively small and only provide the amusement park services. Although the Aladin brand name is not used by these parks, they are still successful and are proving to be quite profitable ventures for A.A.Joyland. The products being offered are similar and are of the same high quality as the products here. The company has plans to expand facilities at all the three parks to attract more customers.

The market penetration strategy can also be followed by trying to come up with a  package for the lower and lower middle segment instead of targeting only the middle and upper middle segment. Certain days can be specified that will allow people from a particular area of concentration of that type of population can come in large numbers which can easily offset the low entry price. The days can be organized for people from Lyari, Orangi, Korangi etc. in such a manner that only these people can come. This can be done by checking ID Cards and by advertising in their specific area only. This will help the park exploit those markets it had not previously targeted.

This strategy although is being followed can be followed more aggressively by opening similar parks at new sites. The strategy calls for opening of at least 3 more parks. The present parks can be expanded and followed by new ones at Karachi, Rawalpindi and Faisalabad. The other major cities are being avoided due to lack of target market in others and law and order situation in Hyderabad. This strategy provides a magnificent opportunity to tap the market all over the country. The Karachi venue has been suggested because the park’s brand name is recognizable at the local level and another park can be located at a place that otherwise would be located at an inconvenient distance from the present location.