The Process of Globalization and the Way Ahead: Research Article by Dr. Qais Aslam

The Process of Globalization and the Way Ahead: Research Article by Dr. Qais Aslam

Fifty years ago, the world was coming out of the World War. The colonial era was being broken by an array of independence movements across the globe immediately to be ushered into an era of the Cold War of the systems. On the quieter front, a basis of a new, much powerful revolution was being formed – the basis of scientific and technological revolution both in the advanced capitalist as the socialist countries. The pace of invention in peace and military industry rose and much developed versions of the old products as we products were being introduced in the world markets.

In 1990, the Cold war had ended. Most of the socialist dismantled their system of economics and politics and even China has started adapting to a combination of both the market as well as the state controlled economic system. Developing nations had started dismantling the state owned enterprises in order to pay back old debts, or in order to receive new debts from the international financial organizations. New laws were being enacted everywhere in order to facilitate the free now of information resources. Multinational corporations had a plain playing field for both economic activity as well as for research and development across continents m a more cost effective manner.

In 1992, the Rio Conference on Human Environment had brought in 27 principles for Sustainable Development of Economic and Environmental activity in the world and by 1996, the World Trade Organization had replaced the General Agreement of Tariffs and Trade Regime. The world was not only at the end of an old millennium; the world had started a theoretical countdown towards entering a new millennium: the millennium of science and technology, economic reforms and integration.

Today, any person sitting anywhere in the world with a mobile phone, a laptop computer and a credit card can think, innovate and sell his or her ideas to those who are willing to buy those ideas anywhere around the world and then with that money buy through e-commerce anything and send it to his home via a courier. All this has been made possible because of advancement in information technology. This is the real spirit of globalization.

The forces that reshaped and will reshape the developmental terrain of the process of globalization are: new innovations in technology, especially information technology; the spread of knowledge across the world; the sustainable growth of population and its concentration in urban centers of the world; the financial integration of the world; and rise in demand for political and human rights across the globe. If nation states can effectively manage these above named forces, then these forces can revolutionize the prospects of development and human welfare. However, the same forces if unmanaged, are capable of generating instability and human suffering that will be beyond the ability of individual nations to remedy. 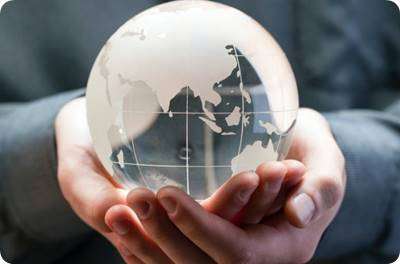 Globalization reflects the progressive integration of the world s economics. It requires national governments to reach out to international partners as the best way to manage changes effecting trade, financial flow’s and the global environment. The process of globalization does not only mean that there is a fast integration of the world economies through opening of borders to goods and resources from other countries and relaxing of exchange controls, but also a fast integration of information, to and from nations, through the channels of information technology. The process of globalization starts with the unification of scientific knowledge around the world, the mergers of businesses, the migration of cultures and ethnicities between continents as well as the advent of thought, innovation and education across the globe. All this has been made possible through the rapid development and induction of information technology in different nations.

What a locality wants and gives to the world and what the world wants from a region or locality or gives to the locality in economic and social terms can only be determined and communicated through the fast-moving and fast- integrating channels of information technology.

In reality, because of the advancement of information technology, education and process of globalization, there is transformation going on everyday in the private sector among entrepreneurs and with people who are inventing new things and creating new solutions. The state machinery and bureaucracy do not stop them to sell their innovations, ideas and products across boundaries. In this process of globalization, or the new civilization as 1 have called it, nations that sell information and innovation, management, culture, advanced technologies, software, education, training, medical care, and financial services, human resources of the advanced intellectual level and other assistance on the internet will supersede others which sell mass produced goods and those that are trying to develop industries on traditional lines.

Information technology and globalization are changing everything in our lives. They have and are still changing the concepts of our social interaction, our concepts of education, freedom of thought, political will, economic policy making, religious beliefs, sexual behaviours and much more that we cannot even imagine.

The concepts of doing business have changed. One has a chance to free one’s mind and open it for the new and amazing ideas from anywhere around the world. Now you can have all the opportunities to get the education of the same standard, as someone is getting in US or England. The global movement of producing the best brains has started; the youth of a poor country like Pakistan have all the chances to show this world the power of their thinking. They can learn the same skills as western people have; they can avail all the opportunities to make their lives beautiful and they can work with the intelligentsia of the world as respected members of the global community.

Hence, what is important today is that, equipped with the power of information and technology, living in the contemporary global scenario, we must innovate and take such risks that will not only develop our individual capabilities, but also use these processes in such a way that we collectively solve the global problems of poverty, disease, war and environmental degradation. In this way, we can finally eradicate the world of all such dilemmas that have plagued the human race and hindered the fast growing and integrating process of global welfare and global cooperation.