The Next Stage of Human Evolution – By K. Sohail 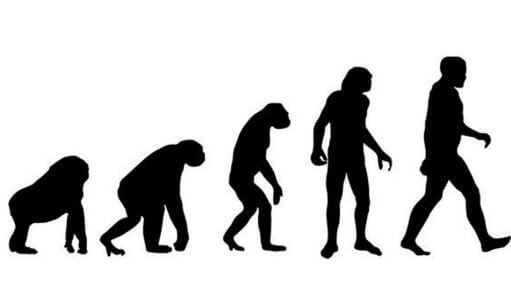 The Next Stage of Human Evolution – By K. Sohail

In the last couple of centuries, scientists, psychologists and philosophers from all over the world have brought to our attention that the human unconscious is multi-dimensional and multi-faceted.

Charles Darwin and other biologists made us conscious of our biological unconscious. They proved to us that life started in the sea as unicellular organisms like the amoeba and after passing through many evolutionary stages over millions of years, transformed into fish, birds, animals and mammals, facilitated by the process of natural selection. The evolutionary process created human beings through the development of the human brain and mind. It is fascinating to see how human embryos pass through millions of years of evolutionary stages during the nine months in their mothers wombs.

A human sperm and ovum unite to become a zygote and gradually grow to become a multi-million cell fetus. In the first few weeks, human embryos do not look much different than the embryos of many animals. When human babies are born, their instincts and genes become part of a biological unconscious that gradually unfolds. As children grow older and mature, they become more conscious.

Sigmund Freud and other psychologists made us conscious of our psychological unconscious. They highlighted that when human children interact with their parents and grandparents, siblings and teachers, they develop a unique personality and learn special defense mechanisms to deal with sexual and aggressive instincts, and coping mechanisms to face the dilemmas and challenges of life.

Freud analyzed the dreams and emotional problems of his patients and discovered a hierarchy of defense mechanisms that human beings use to deal with their emotional conflicts. People who have serious emotional problems and suffer from mental illnesses like schizophrenia and manic depressive illness use the most immature defense mechanisms like projection and denial, while people who are healthy and are able to work and love and play use the mature mechanisms like humor and sublimation. The more evolved the adult, the more mature the coping mechanisms.

Karl Marx and other sociologists and economists made us conscious of our social unconscious. They shared with us that many social, economic, political and cultural factors play a role in historical evolution. Marx discussed the concept of dialectical materialism and showed us how the means of production and the economic systems of feudalism, capitalism and socialism affect the human psyche, and how industrialization can dehumanize humanity. He encouraged communities to become aware of historical processes so that they can consciously contribute to human progress. Trans-cultural psychiatrists brought to our attention how human emotions and emotional problems are shaped by the cultures in which human beings live.

Existentialist and humanist philosophers like Jean Paul Sartre, Eric Fromm and Victor Frankl made us aware that human beings are free to make choices in life and to give a unique meaning to their personal and social existence and to their life challenges. They encouraged humans to take responsibility to make their lives more meaningful. Frankl brought to our attention that human suffering becomes more bearable when it finds a meaning.

In the 20th century, because of advancements in science and technology, human beings have not only found cures for many serious illnesses but have also created bombs and nuclear weapons. As they learnt to cure, they also learnt to self-destruct. In the 21st century, humanity is at a crossroads and human beings have a choice to grow to the next stage of evolution or commit collective suicide.
Animals have changed through natural selection but humanity will evolve because of human selection and the choices human beings will make individually and collectively.

If we study the worlds six billion human beings, we can see that they are on a broad spectrum, from the least evolved individuals, families, communities, countries and cultures to the most evolved. The more evolved human beings have developed three characteristics, the 3Cs.
Critical Thinking

Highly evolved human beings have developed critical, logical and analytical thinking. Socrates and other Greek philosophers provided significant constructs by which human beings can think rationally and critically analyze their traditions. Such thinking is used in the evolution of science, philosophy and psychology; wherein human beings challenge the social conditioning they receive from their families, communities and cultures.

Highly evolved human beings have developed a creative imagination and an appreciation of fine arts. Some of them have creative personalities and produce poems, plays and paintings. They have a well developed aesthetic sense and are able to entertain and enlighten others in their communities and cultures. Where human beings have developed print and visual media and are using newspapers, television and internet to communicate, other communities and cultures in the world are able to receive their creations.

Highly evolved human beings have also developed a compassionate heart and their empathy is not limited only to their own family and tribe but extends to other families and tribes. They focus more on similarities than differences. The most evolved human beings care for all of humanity. The scientists who discovered penicillin and insulin did not develop them just for their own families but for everyone. Such human beings strive to decrease human suffering and improve the general quality of life. Many philosophers and reformers have worked to raise social consciousness so that human beings would develop compassion for the wider community.

Highly evolved human beings with creative personalities, whether scientists or artists, poets or philosophers, reformers or revolutionaries, have been trying to guide other human beings to the next stage of human evolution by helping them to think critically and logically, imagine creatively and interact compassionately. They want all of us to rise above the tribal mentality and social conditioning so that we can achieve wisdom and live meaningful and peaceful lives. We need to develop communities, cultures and countries where all citizens have equal rights and privileges and opportunities to grow to their fullest potential. We have to learn to resolve our personal, social and political conflicts peacefully. That is the only way for all of us, individually and collectively, to grow to the next stage of human evolution.