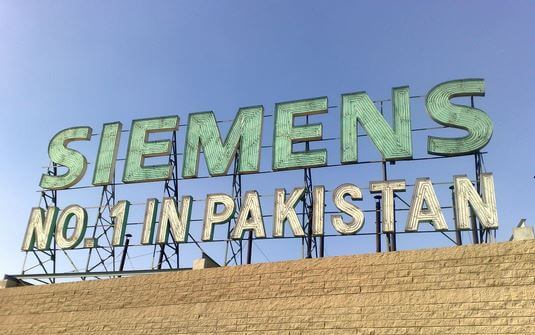 At Siemens a process layout is used for the production of  DG Sets.

Siemens has tried to optimize their process of DG assembly by producing the two components at their facilities and procuring the engine, which is a more complex part from outside vendors. This way they have not only minimized their cost yet also have economized the production space to be used in other processes.

The plant for DG sets could be divided into 7 sections:

Now we will analyze the plant layout at Siemens Pakistan for DG sets assembly. We have done so by conducting a comparative analysis of the Principles of good Plant Layout as mentioned by Dr. Z. Huda in his study, with the Siemens DG plant as to what extent they have been followed.

This principle states that “ That layout is best which integrates the men, machinery, materials and supporting activities in a way that results in the best compromise.”

At Siemens Pakistan the plant for DG sets ahs been arranged in a very integrated manner. We noticed a very congenial environment without any disorder in the sections, processes, or equipment. The processes, equipment and the sections have been arranged in such a manner that the whole process seems to be very organized and optimized. The sections are arranged in separation with each other, yet they make a very organized plant for the assembly once the process of the assembly starts, and the process is completed very smoothly without any chaos.

However, there is one thing that we think needs improvement, the space available is very less, so the whole place seems to be very congested with equipment lying all over the place. There should be a bit more of space which would not only improve the atmosphere but would also allow the process to run more smoothly.

According to this principle the distance between different interdependent and related  sections and processes should be minimum so as to optimize the process.

In Siemens Pakistan the principle has been employed by using a layout that minimizes the distance traveled, yet there is some short comings as well which are discussed below:

The plant should be in a manner that work area for each operation or process should be in the same order or sequence that forms, treats, or assembles the materials.

In Siemens the layout is such that the flow is very smooth. The plant has on its left the storeroom for alternators and skids, from where they are moved in for assembling. The electrical shop for control panels is at the back on right, which again joins in just when it is needed in the second step. So overall the flow is very smooth.

The shop floor or the production hall should be utilized very economically to minimize the land requirement.

At Siemens the space has been minimized to such an extent that the assembly hall for DG set has become very congested. Apparently, it is not effecting the process but the performance could be improved if a bit more of space is allocated to the assembly hall. Things could be organized more this way and also it would save a lot of time that is wasted in figuring the things out in such an intense environment.

Principle of Satisfaction and Safety

The work environment should be very congenial for the workers and they should feel secure and satisfied with the atmosphere.

In Siemens the values are of higher priority to the men rather than the processes and machinery. Special arrangements have been made to ensure worker safety. There are sign boards and posters all over the place warning and guiding the workers how to protect themselves from hazards. Also in the DG set assembly hall it is ensured that every thing is fixed into some sort of platform or fixture to avoid any mishandling or accidents.

As for the workers satisfaction, we spoke to a number of factory workers and from the feedback we got at the DG set plant was that the workers are satisfied as the environment is much better than any other productions facility. One complaint, however was that of the less space in the assembly hall, that was making the environment very congested.

Materials handling is the movement of raw materials and finished goods and also the materials during production.

At Siemens the components used in DG Sets as well as the sets themselves are heavy in weight. There are DG sets of all sizes ranging from the 15 kVA to 1000 kVA, which vary in their sizes and weights.

The different types of materials handling equipment used is:

Siemens claim a very high quality of their products and they are considered internationally to be reliable and consistent in quality. They have acquired ISO 9001 (In which the company designs, produces and sells the product) through consistent quality and have thus maintained their competitive edge in the market.

The quality control at Siemens Pakistan follows the standards set by the parent company for their products, while some of the standards that concerns the process, i.e. time for completion of a job, are negotiated with the labor union.

Siemens follows a very intense quality check process whereby each and every product is very carefully tested for its operational accuracy and the design. If any product is found not meeting the preset standards it is returned for rework and of it cannot be reworked it is scrapped.

At the DG set assembly plant, the set after its assembly is take to the test field and is tested thoroughly for its performance, and if passed it is then passed on to the paint shop. They are not using SPC or SQC for checking of quality, rather each and every unit is extensively checked as the production is not large scale and it is easy to keep a control on a unit to unit basis.

According to Siemens management they have a state-of-the-art test facility where the DG sets are tested to international standards. All the sets are test run and certified according to Siemens quality standards, to ensure “ ready for operation” before dispatch. They claim to have complete in-house facilities, equipped with both resistive and inductive loads, to accomplish. DG Sets are tested at variable loads as per standard protocol/client’s requirements.

The quality process employed at Siemens is very intensive, yet has a very big shortcoming that there is no check on the product during the process and it is checked only after  it has been completed. So if it cannot be reworked the product has to be scrapped which is very costly at times. They should devise some quality control over the DG sets that is spread over the whole process to minimize the chance of low quality and also to save themselves some costs.