Love On The Line Of Control – A Story by Col. D.Pal [Narration: R. Ghosh] 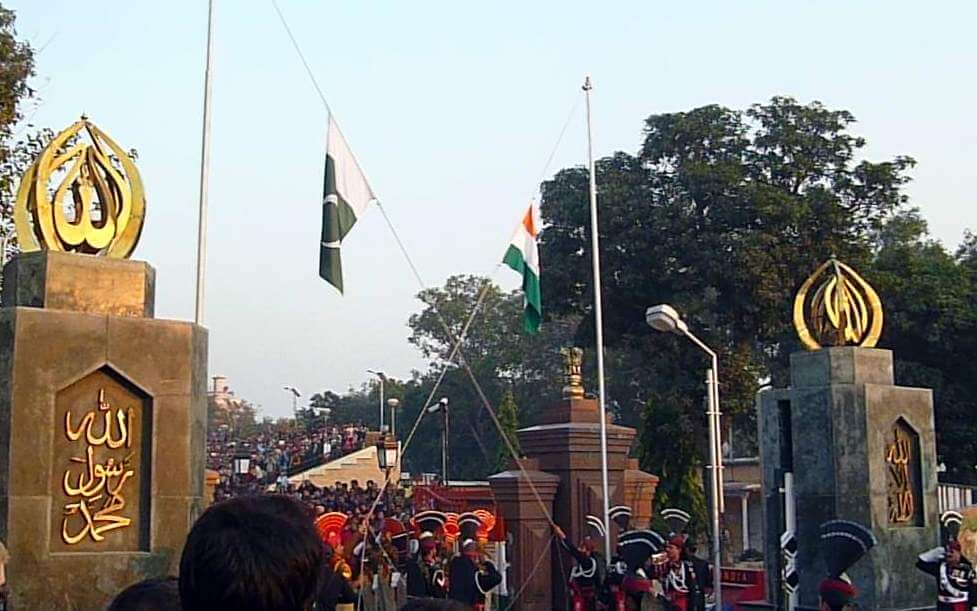 There seems to be a lot of acrimony and bad-blood between some Indian and Pakistani contributors. I consider myself to be a lover of truth and beauty and consequently of peace and harmony.

I place before the readers an article which has been published before. This article has a message for all of us.

Though it is not fashionable anymore but I remain an unabashed admirer of Mohandas Karamchand Gandhi, the good he tried to do outweighed the mistakes he made many times over. He was a failure as was the entire generation in those bloody days of partition because collectively they were to blame for the slaughter and mayhem of hundreds and thousands of innocent people.(Gandhi did try his best to stop violence). In this “blame list” I include not only members of the Congress and Muslim League but all the “good” people who remained silent and did nothing.

Unlike most Indians I consider Mr. Mohammad Ali Jinnah to be a great man. History written outside Pakistan has not been very kind to him. He was a man who can be described as being sea-green incorruptible (ala Nirad C Chaudhuri). He had the calibre of being a great Prime Minister of undivided India if things had turned out differently. He was a very proud man and had a lot to be proud about. He was instrumental in forming a homeland for “some” Muslims of India a homeland whose ethos as envisioned by him was completely destroyed by all the rapacious, greedy and bigoted leaders this homeland was unfortunate enough to have at its helm in later periods.

Please read the following story. I sincerely hope that we the people of this generation will be able to clear up the mess which our ancestors have bequeathed to us.

I am writing about a night in 1972, when two Colonels from opposite sides ‘” one Indian and one Pakistani ‘” shared the same tent, drank from the same bottle and talked till dawn on every topic under the sun, barring the bitter war they had fought on the frozen and desolate heights of Kargil, in December 1971 ‘” only a few months earlier.

After the 1965 India-Pakistan war, the political leaderships of both countries decided to not return the territory in Kashmir captured by their respective sides. It was, therefore, agreed that a new Line of Control (LOC) would be drawn out by mutual survey and consent. It was decided that the commanders in each sub-sector were to meet on the new LOC, at a prearranged time and place, with white flags and no weapons. As such, I was scheduled to meet with my counterpart in the Pakistan Army at a remote spot, past a particularly treacherous pass only recently captured from Pakistan.

I remember it was early-April, and the snow underfoot had just started melting. Since the meeting place agreed upon was Indian-occupied territory, it fell to us to make all the administrative preparations for the conference, plus arranging all the requisite army chai pakoras . We were fortunate in this regard, to have amongst us Zorawar Memon, a walrus-moustachioed Keralite with a penchant for brandy. Our platoon of soldiers, together with half a dozen local ponies loaded with snow tents, kerosene oil bukharies (heaters), oil stoves and all the rations we could collect, set out for the meeting spot at early dawn. Given that we were hosting the meeting, we also took along the battalion’s best cooks; after all, we had to impress our guests from across the border with our most scrumptious offerings.

The journey through the pass was particularly arduous, as not only was the trek uphill, but the snow around was still ankle deep, making it difficult to walk. However after crossing the pass, the downhill journey was easier. Having arrived at the meeting spot, we proceeded to unpack and set up camp. It took us about an hour and a half to unload everything, pitch the tents, get the oil bukharies going and start cooking for our incoming guests. The time passed quickly, though, and it wasn’t long before we spotted a line of soldiers, wearing shalwar kameez and carrying fluttering white flags, descending the slope, some distance away.

All of us, especially the young soldiers, were extremely excited and enthused by the prospect of meeting these, supposedly enemy, soldiers. Surprisingly, there was no hatred or ill will against these men with whom, only a few months back, we had been exchanging fire. The approaching column of Pakistani soldiers was led by a handsome middle-aged man, who introduced himself as Colonel Azad. The Colonel was accompanied by a Major, a Captain and an unarmed platoon of soldiers from the Northern Infantry. All appeared friendly, and inquisitive but respectful.

During the course of tea, Colonel Azad happened to say something in a local Punjabi dialect to his Captain. The language sounded so familiar that I could not resist asking the Colonel where he hailed from. Imagine my surprise when he named a district to which my family had belonged, prior to the Partition. On further investigation, it transpired that not only did the good Colonel and myself come from the same district, we also came from the same village and had both studied at the same school. The soldiers from both sides were thrilled that their commanders belonged to the same village, and from there on, the meeting took on all the aspects of a boisterous boys’ night out.

By the time we had finished eating it had started snowing, initially slowly, but gradually gathering momentum, getting heavier and heavier. As this was an unusual occurrence in April, it seemed that even the gods were conspiring to prolong the meeting. It became clear that it would be impossible to cross the pass ‘” where the snow was already waist-deep ‘” that evening, and we would have no choice but to spend the night at the new LOC. However, this was not as simple as it sounds, as we did not have sleeping bags, or even enough kerosene oil to burn the bukharis and keep the tents warm. We were, however, saved by an enterprising Pakistani subedar who came up with the idea that since his post was relatively near-by, he would take about thirty jawans ‘” both Pakistani and Indian ‘” and bring back enough sleeping bags, blankets and kerosene oil for us to safely pass the night.

I couldn’t help but wonder at the faith and confidence both sides had developed in each other, in only a few hours; the trust that enabled unarmed Indian jawans to willingly enter enemy territory and, likewise, enabled Colonel Azad to allow enemy soldiers to enter his camp and see the layout of his post. It was almost as if we had nothing to hide or fear from each other. The soldiers returned after about two hours, with enough blankets and kerosene oil to keep us all warm while we slept.

But sleep was the last thing on our minds. All through the night, we sipped hot tea, talked of the past, present and future of the sub-continent. Had it been left to the two of us, we would have found solutions to all the problems between India and Pakistan that night. We would have decided to live like the US and Canada, with open borders and no visa restrictions. We would have seen to comprehensive economic co-operation as in the European Union. And we would not have restricted this to India and Pakistan; we would have included Sri Lanka, Nepal, Bhutan, Burma, the Maldives and Bangladesh too.

As the evening progressed, together with the counsel of our junior officers, we even came to a viable solution of the Kashmir problem. First of all, we would remove the prefixes of Pakistan-occupied and Indian-occupied; Kashmir would simply be Kashmir ‘” with its own government, but under the protection of both states. By this point, the junior officers were also enthusiastically contributing their ideas, and one of them pointed out that if both India and Pakistan lived peacefully, there could be a drastic reduction in the armed forces and defence expenditures of both countries. Those saving could be spent on repairing the neglected infrastructures of both countries.

And so the night wore on. By the time we were done, we had eradicated poverty, unemployment, illiteracy, hunger, disease, droughts, floods and filth from the face of the subcontinent, and the standard of living had, in our minds, risen as high as that of Europe, the US or Canada.

All this we six Army officers ‘” three Indian and three Pakistani ‘” of average intelligence and experience, were able to achieve during the course of one freezing night. We resolved to get the millions of soldiers of the sub-continent to throw their rifles, guns and missiles into the Ganges and the Indus and convert their tanks and armoured personal carriers into earth-moving machines. We would transform the Hindukush mountains into the biggest earthen dam ever constructed, bringing together the waters of all the mighty rivers of the subcontinent, from the Indus, Chenab, Jhelum, Ravi, and the Sutlej, to the Ganges, Jamuna and the Brahamputra, into this mighty dam. If the Chinese could build the Great Wall of China, and that too centuries ago, we could certainly accomplish this task with all the 20th century technology we possessed. We named the dam the South Asian Sub-Continental Sea, and it ran along the entire breadth of the sub-continent, more than 3,000 miles long and 10 miles wide. And from it would spring a network of canals to irrigate the entire sub-continent, enabling us to green every inch of mother earth. With the flow of water under control, we could eradicate floods and droughts.

Oh we had it all worked out. And we were so engrossed in our thoughts and well-intentioned plans that we had entirely forgotten why we had gathered at this meeting spot in the first place: to draw a new Line of Control. Now, after all that camaraderie, no-one was in the mood for drafting a worthless, war-mongering line ‘” which was invisible to all but the human eye, in any case. I handed the map over to Colonel Azad, and told him to draw the line any way he wished. He looked at me aghast and asked, ‘How can you do such a thing without the approval of your higher authorities?’

‘Would you not do the same for your vatani (village mate), if you met him after so many years and, that too, under such strange circumstances,’ I replied.