The Mosquito – By Beej K Singh 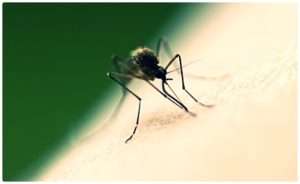 He was running between two tall buildings. There was a power outage. It was a narrow lane. There was mud, there were open sewers on both sides, there was smell, there were feces, and there was darkness. He thought he heard footsteps. He fell down a few times and scraped himself but kept going.

Jaggu watched the mosquito from close range.
It buzzed near his left elbow for a while, trying to make up its mind. Finally, it selected a fleshy part of his middle elbow and landed there. With its trunk, it got busy breaking ground and digging for the red drink.
There was first a ticklish feeling which almost immediately turned into an unbearable itch. With tremendous self-restraint, Jaggu held back his right hand which had readied itself to attack the invader.
“I won’t touch you, I won’t touch you…” he repeated to himself, again and again.
The mosquito was satiated and the red color showed through. But it kept drawing more and more. Soon, its tummy bulged – from afar; it looked like a red drop on a large brown canvas.
* * *
Jaggu’s aunt handed him money for groceries. “Don’t forget the salt! And we need a light bulb, too.”
Jaggu was an orphan who lived with distant relatives. Uncleji was a custodian at the local high school and did a few other odd jobs on the side to support the family, some more legit than the rest. Jaggu was an extra mouth to feed in midst of permanent paucity and although he always tried to ‘earn his keep’, he was merely tolerated – and he knew it.
By the time he was done, the thirteen year old was overloaded. He carried everything in a jute bag, except the salt in a paper package inside a plastic bag. The burden made him stoop a little to right and he walked as if he had a slight limp. He remembered the light bulb just as he was ready to start the long trek back.
Jaggu had never before seen the fat man who occupied the counter at the electrical goods store and who was probably filling in for somebody. Jaggu handed him the hundred rupee bill. The fat man seemed distracted as he reached inside a leather bag and started counting change. He often turned and stared at Jaggu – losing count and restarting.
Jaggu felt self-conscious. Finally, the fat man handed him the change. As Jaggu reached over to pick up the sixty watt light bulb, he suddenly took a sharp intake of breath – encountering cold, stubby fingers gripping like vise. He tried to pull back but felt like a little goat tethered to a peg with a strong rope around its neck – a strong rope impossible to break and the only way to pull away was to lose life itself.
* * *
When Jaggu was little, with parents of his own, his mother once told him a bedtime story.
“…the baby elephant was thirsty. It stepped into the river, and dipped its trunk – ready to drink. The alligator was waiting for somebody just like him – not too little and not too big. The alligator gripped his leg and held on. The grip was strong and the muddy water was the alligator’s domain. The baby elephant tried to pull back but the alligator was stronger and the elephant was helpless. Slowly, he pulled the elephant deeper into the muddy, sticky water…”
“Then what happened, mom?”
“The baby elephant got pulled in, till only his head remained above the mud. He looked at the sky and the blue clouds. Ready to give up hope, he prayed…”


Hey Govind, raakho sharan meiN
Ab to jeevan haarey
Grah pakDey paaoN mere
Jal meiN kheeNchey daaRey…
Hey Govind, raakho sharan meiN
Ab to jeevan haarey
Deen gaj – bus sharan tero
Shyam, Shyam pukaarey…
“And then?” A tear drop formed and slowly started on its way down.
“Then Lord Krishna, who heard the call, sent in his chakra and its powerful spinning blade cut-off the alligator’s grip and freed up the baby elephant.”
The story had ended.
* * *
The fat man looked straight ahead. In his right hand, he held the leather bag which contained the daily cash. The fat man had not bothered to lock up the store – merely downed the shutters with one hand as he held Jaggu’s shoulder with the other. Now he held Jaggu’s right arm just above the elbow. He tried to look nonchalant, but there was no mistaking the strength of his hold.
He was breathing hard – like a beast that has just made a kill and only wishes to carry its prey somewhere it can feast leisurely. A beast that knows exactly how to spot and attack the prey – a hunter with the uncanny ability of distinguishing preys who squeal from those who never do as the shock and the trauma make them mute at the minute that counts and the minute that never goes away during all the minutes that follow.
The road bifurcated. The left turn – a few miles down would lead to Uncleji‘s home. Jaggu had no clue where the right one led to for he had never traveled that road and was suddenly very afraid to. The fat man turned that way. Jaggu looked longingly back as they pushed ahead – a steam-roller dragging a little tiny plant in its machinations.
Jaggu looked up. The sky was cloudless – except for traces of white at one end. There was nothing up there but swarms of mosquitoes.
The fat man was breathing hard. His nose puffed up and sweat formed on his forehead and a few drops fell on Jaggu’s shirt sleeve. His grip was even tighter than before – Jaggu felt a numbing of his left arm as if the blood circulation was being cut off.
An oversize mosquito hovered near the fat man’s face then landed on his right nostril. Without even thinking, he swapped with his hand, almost killing it. Jaggu took flight and ran into an adjacent lane – unsure if it was a blind alley.
He ran faster than he had ever run in his thirteen years – as if keeping ahead of a running truck – as if even one misstep would crush him and splatter his guts all over the dusty road – to mingle with the dirt and the mud and the little insects crawling in the wet-wet stinky green grass.
He was running between two tall buildings. There was a power outage. It was a narrow lane. There was mud, there were open sewers on both sides, there was smell, there were feces, and there was darkness. He thought he heard footsteps. He fell down a few times and scraped himself but kept going.
“The light! Must head for the light!” He kept telling himself.
He finally emerged on the other side into a familiar street. He took stock. Surprisingly, most of his provisions, including the light bulb, remained with him – but the salt package had fallen somewhere in that alley. The heavy load had gotten dumped – which explained why he was feeling lighter.
* * *
The mosquito finally pulled out its trunk. After a few unsuccessful attempts at fluttering its wings, it finally flew away. It was having difficulty because of the amount of the blood it carried. Jaggu continued to stare after it for a while.
Jaggu’s thoughts were interrupted by Uncleji – who was in a foul mood today. Somebody had reported him to the school headmaster.


Uncleji handed Jaggu some money, with a stern warning.
“Don’t forget the salt this time, or I will box your ears good – even worse than yesterday!”