Democritus: In Kalam of Allama Iqbal – By Prof. M. Hassan 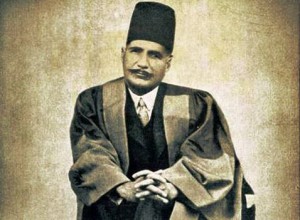 Democritus 460—370 B.C. was a Greek philosopher. He propounded the atomistic theory holding that the universe is composed of atoms that move about in space and form themselves into bodies. Atoms are eternal, while the bodies perish; the soul is a form of fire which ani¬mates the human body. He held that pleasure and self-control were the goats of life. He wanted the people to be cheerful, and his cheerful disposition won for him the name of The Laughing Professor. According to legend, he put out his eyes so that he might think without outside disturbances.

In his lecture “The Revelations of Religious Experience”, Iqbal commented on Democritus atomism as follows:

“On the analogy of our conscious experience, the universe is a free creative movement. But how can we conceive a movement in¬dependent of a concrete thing that moves? The answer is that the notion of ‘thing* is derivative. We can derive things from movement; we cannot derive movement from immobile things. If, for instance we suppose material atoms, such as the atoms of Democritus, to be the original Reality, we must import movement into them from the outside as something alien to their nature. Whereas if we take movement as original, static things may be derived from it. In fact, physical science has reduced all things to movement. The essential nature of the atom in modern science is electricity and not something electrified. Apart from this, things are not given in immediate experience as things already possessing definite contours; for immediate experience is a continuity without any distinctions in it. What we call things are events in the continuity of nature which thought spatilises and thus regards as mutually isolated for purposes of action. The universe which seems to us to be a collection of things is not a solid stuff occupying a void. It is not a thing but an act.”

In his lecture “The Spirit of Muslim Culture”, Iqbal explained that the reason why the atomism of Democritus never became popular in the world of Islam was that it involved the assumption of an absolute space. Iqbal pointed out that under the circumstances the Ash*arite were, there¬fore, driven to develop a different kind of atomism, and tried to overcome the difficulties of perceptual space in a manner similar to modern atomism.